Weird Sexual Disorders In Men That Will Leave You Amazed 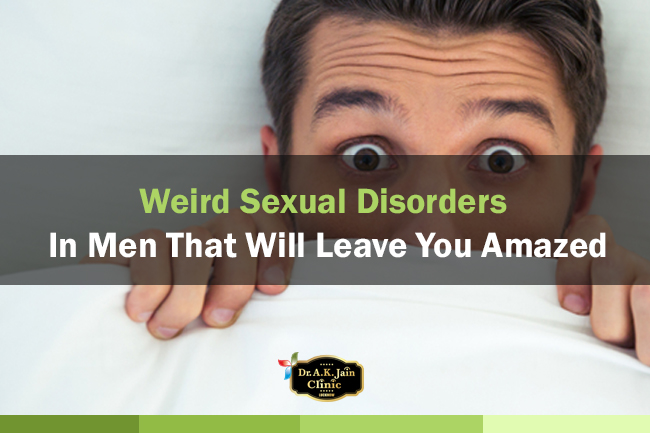 Sexual disorders don’t necessarily have to mean problems like erectile dysfunction or premature ejaculation. Weird fetish and desires also sometimes come under the tag of sexual disorder. The fact is, there is some sort of sexual deviances in all of us, only when it reaches a point where it is unbearable, it is considered as a sexual disorder.

Sadly, only sexual dysfunctions are talked about and treated, that too only recently. Sexual disorders are not even acknowledged or discussed. It is because of the culture of the society that this has become a taboo in our culture. But what many people don’t know is the more taboo it is, the more the desire builds!

So, let’s get into detail about what exactly is a sexual disorder, shall we?

A sexual disorder is usually defined as a difficulty experienced by an individual or a couple during any stages of sexual activity.

Sexual disorders have been classified into broadly 3 subtypes  –

The Desire Stage – this is the first stage of any sexual activity. This stage has 2 main sub-disorders. The hypoactive disorder is when a person is disinterested in sex and may partake in it as a marital duty. Aversion to sex is when is person is disgusted by the thought of sexual activity, this is usually seen in victims of extreme trauma caused by sexual assault.

The Arousal Stage – During this phase, the main dysfunction is Erectile Dysfunction, if you had this disorder you wouldn’t be able to hold an erection long enough.

The Orgasm Stage – Premature Ejaculation and Ejaculatory Incompetence are the two dysfunctions that occur in a man at this stage. Premature Ejaculation is when a man ejaculates too quickly before his partner can also be sexually satisfied, and Ejaculatory incompetence is when a man can not reach an orgasm or it takes him a very long time to reach an orgasm.

Sexual Pain Disorder – This disorder is categorized by a feeling of pain during sexual activities –  Dyspareunia. Though usually, women go through this, there are men who suffer from this as well.

With all these disorders it can be quite scary to imagine having any of these problems, but not to worry! All of these dysfunctions have cures and the best part is… the solutions are all NATURAL. Premature ejaculation has long been treated with Ayurveda and it’s completely natural. You can seek remedies in pure ayurvedic medicine that have no bad side effects. And remember that you can always consult a good sexologist for any professional advice.

This can be a little confusing to people who don’t suffer from this disorder and have also never heard of it. Paraphilia is a term given to the disorder when unusual objects or situations are necessary to achieve sexual arousal. Some of the disorders listed as paraphilia are illegal in most countries. These include scenarios that include inflicting pain on self or others or getting aroused by SHOES! Yeah, you read that right, that’s an actual fetish.

Fetishism also comes under a kind of sexual disorder, when a person is sexually attracted to non-living objects. This can be manifested towards innocent objects like your partner’s underwear or sometimes things a little more risque like getting aroused by nature. (Don’t worry, we won’t fetish-shame you!)

Transvestism is when a person gets sexually aroused by cross-dressing. This is more common in men than in women.

Exhibitionism is a form of paraphilia where a person gets aroused by exposing their genitalia in a public space. This is illegal in all countries and is a punishable offense. Exhibitions are very rarely assaultive they are more of a nuisance to the public.

Voyeurism or “Peeping Tom Disorder” a person gets aroused watching others engage in sexual activities.

Pedophilia is the act of getting sexually excited by getting sexually involved with a child. In pedophilia, a lot of trauma and distress is caused to the victim, i.e the child. That is why it is a punishable offense in every country.

Though there is no shame in having an innocent fetish or being a transvestite, you can always consult a good sexologist to get any help that you need. It is also a good idea to get some help for sadism and masochism as they can be very dangerous and harmful for yourself and others involved. But if you show any suggestive signs of a pedophile you should immediately consult a therapist as it is not only morally wrong but also a crime.

This is a disorder where a person experiences conflict or confusion about his/her subjective feelings of masculine and feminine. The person’s biological gender may be male but they will feel more comfortable living a feminine lifestyle.

Such a disorder can cause a great amount of distress if you’re suffering from it, consulting an experienced sexologist will not only give you comfort in sharing and expressing your feeling but will also help you get some insight on your available options.

Remember, not all disorders are harmful or morally wrong. Innocent fetish has nothing to be embarrassed about.in fact, you should be forthcoming and discuss it with your partner so that both of you can take out a solution.

Unfortunately, these subjects are not always spoken about but they are more common than you might think. But in today’s world, it has become very easy to find professional help or consult a sexologist for your disorders. If you are concerned about your problems I will advise you to consult a sexologist.

That’s all for this topic if you have any problems regarding sex and marriage feel free to email me or comment down below.