6 Reasons That Will Restrict You From Enjoying SEX 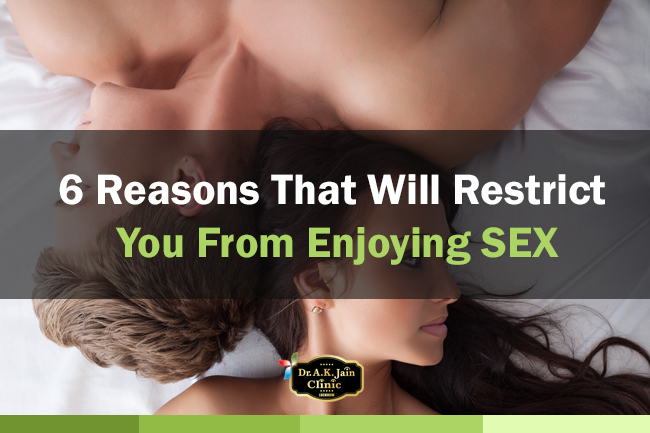 Sex is a quintessential part of our lives, as normal as breathing. One can’t deny the role a healthy sex life plays especially for married couples. There’s a reason why physical intimacy is not just confined to reproduction. For humans, it is a way of bonding while simultaneously having pleasure. A good session between the sheets not just improves your sex life but also improves your mental and physical health. Many studies have established the positive effects which regular sex offers to both men and women. The feel good hormone oxytocin keeps you happy as well as makes you feel closer with your partner. Few minutes of passionate sex is as good as a workout and keeps many diseases at bay.

However, many couples feel that they are drifting apart and not able to enjoy the bliss of sex. Considering how important sex is in our lives, lack of it starts brewing trouble in the aisle. There can be many underlying reasons which might be causing the drift and it’s important to address the issue rather than suffer in silence. Communication is the key which can certainly help in solving the issue.

Here are 6 common reasons which might be taking a toll on your sex life:

When expectations are not being met, in long run it creates resentment which starts reflecting in other aspects of life as well. In such cases, one of the partners is always looking for strategies to get their sexual desires fulfilled while the other person is struggling to meet their partner’s desires.

It has also been observed that parenting takes a toll on the sex lives which applies especially to women. Once the baby is born, women get involved with their babies so much that they completely forget about sex.This might work as a major turn-off for their husbands.

It’s hard-wired in our mindsets and societal norms that a mother is the one to who spends most of the time with kids as compared to fathers. The needs of the men are being ignored constantly which creates friction and resentment among couples.

For few couples, the problem arises from their inability to discuss the topic itself! Many parts of our society still consider sex as a taboo and refrain from discussing it openly. They don’t take sex as an integral part of life always tries to suppress the subject. Having brought up in such surroundings creates a lack of self-confidence and leads to a poor self-image.

These people might feel very vulnerable in suggesting sex to their partner and might suffer from constant fear of rejection.

If couples initiate and discuss their issues, they can get back the spark in their sex lives. But it would require at least one of the partners to take the initiative of resurrecting their dull bedroom life.

Yet another factor which causes resentment in couples is over expectation. People often compare their lives with others or to the one that is shown on silver screen. Many people, especially women have their own idea of fairytale romance and lovemaking, the passionate and sultry sex!  When reality strikes them, they become repulsive.

At times, the trouble arises when one of the partners associate sex with freedom or conquest. When the other partner fails to validate, trouble starts brewing.

For men who take sex as conquest, making love with the same partner can hardly satisfy their ego.