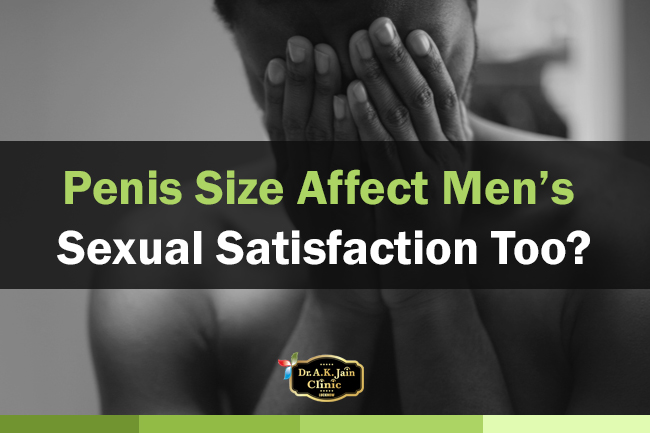 Penis size has been a matter of concern for men since ages. Though they blame it on women many studies and surveys have established the fact that the penile length has got nothing to do with sexual satisfaction.

It is their self-assumed myth and misconception which leads to this hullabaloo around penile length.

The size of the penis matters only because for men it matters and surprisingly women have quite a contradictory opinion.

If you have an in-depth knowledge of woman’s anatomy you will realize that it is not the length of the penis which gives sexual pleasure, it’s the girth that matters.

Several studies show that a woman needs only 3-4 inch of penis for pleasure and stimulation. In fact, there have been instances wherein women have felt uncomfortable with a large penis as it strokes the wall of their cervix.

Some men might argue stating that a large penis makes a woman feel fuller and offers more stimulation since large penis caresses the clitoris while thrusting.

But the same experience can be given to a woman by trying various other techniques in case you have an average or small penis. A lot of sexual pleasure depends on the techniques.

If penile length was the only criteria for sexual satisfaction, there would not have been so many women with complaints about lack of orgasm during intercourse.

Women with partners who had a large penis would have been the most satisfied. Fortunately, that’s not true. Sex is a lot more than the size of a penis.

The process of satisfying a woman starts way before hitting the bed. You need to make her feel loved, admired and respected. She needs to feel desirable and sexy. Then comes the bedroom part which begins with sufficient foreplay!

You need to indulge in a lot of hugging, kissing and cuddling to get her in the mood as well as arouse her.

Sex is not just about penetration and stroking. The entire experience counts.

Many women don’t even care to register the size of your penis. It is love, passion, and techniques that matter to them.

Physical attractiveness and romance are what drives them crazy which does not come from large penis!

One of the surveys found that:

– For most women width was more important than the size of the penis.

– Only 5% of the sample size reported that length helped in feeling better than the width.

– Few women also suggested that a large penis causes discomfort and they find themselves not big enough to accommodate a huge penis.

–None of them believed that the width and size of the penis were equally important.

It clearly suggests that width is desirable for women and not size. The width of a penis at the base offers more stimulation to the clitoris.

Experts also say that a wide penis helps in making the women feel full which is quite satisfying for them both physically and psychologically.

Some researchers have also found that many men are equipped with normal size penis but it’s their own misconception of a smaller penis.

Since they view it from above, the size appears to be small.

It is crystal clear that penile length has not much to do with a woman’s satisfaction in bed; it only affects men’s psychological satisfaction.

Having a small penis causes anxiety in them due to false notion about women’s satisfaction being directly proportional to penile length. It also causes insecurity and negative body image in men which affects their sexual desire.

Having small penis creates performance pressure which sometimes causes inability in getting aroused.

Men suffer from this constant embarrassment and fear of rejection from their partner due to small penis.

In some men the fear of not being able to satisfy their partner refrain them from having sexual intercourse. Its’ high time men accept themselves the way they are and open their minds towards the truth of women’s sexual satisfaction.

Being insecure about penile length only hampers their sexual satisfaction and confidence.

So all men out there forget about the size and explore various ways to make sex an exciting experience for both of you!

If you found this article helpful, don’t forget to check other articles. And for more sex and health-related advice comment down below .