Are You Dissatisfied With Your Penile Length? These Exercises will Help In Penis Enlargement. 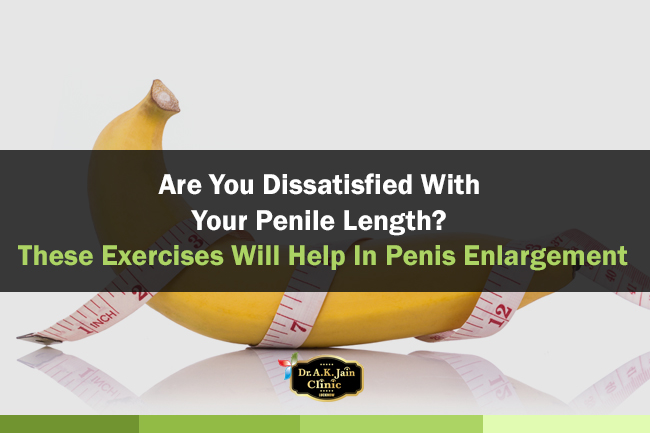 For men, the size of their penis is often associated with their ego. Men with a large penis are often seen bragging about the same and on the contrary men with small penile length are often embarrassed to discuss it.

They are constantly looking for ways that can help in achieving their desired length. Such men suffer from fear of rejection and hesitate in having sexual relationships. The fear of not being able to satisfy their partner creates stress and anxiety in them.

The male reproductive system includes the penis, the seminal vesicles, prostate gland and the testicles.

The penis is a spongy body which has the ability to erect during sexual excitement. Penis also allows the urine and sperms to flow out.

There are numerous ways of increasing the size of the penis and the exercises are known to have a 100% success ratio.

But the exercises should be continued for 5 days a week for a minimum of 6 months. However, the results will start appearing within 2-3 weeks.

How Does Exercise Help In Increasing Penile Length?

The penis consists of 3 chambers made of spongy tissues which are filled with blood that flows through a circulatory system.

When these chambers fill with blood, it leads to an erection. The exercises will cause these chambers to expand which will lead to more absorption of blood and an increased penis size.

However, it is to be noted that if there is any swelling, soreness or bubbles in the penis, the exercise should be stopped for a while and resumed only after the symptoms disappear.

Few precautions to consider while the exercise routine:

These 4 Exercises Will Help in Realizing your Penis Enlargement Goals:

It is one of the first steps before beginning the actual exercise which helps in increasing the blood flow through penile tissues and makes the skin more flexible.

Method: Soak a towel in warm water and wrap around the penis along with testicles. You might feel a little discomfort initially but leave it wrapped for 2 minutes. Repeat the process for at least 3 times. Hot water tub or Jacuzzi can also help but avoid staying in them for more than 10 minutes.

The method can offer miraculous results by enhancing the length of the penis up to 10 inches and circumference by 7 inches if started at an early age. The exercise not only increases the blood flow but also tears down muscle fibers which lead the fibers to grow stronger and even larger.

Method: Hold the base of your semi-erect penis with forefinger and thumb to make an O like shape. This will block the blood circulation and more blood will be collected in cells.

Now, start moving the hand forward milking blood in the penis shaft filling more blood in the cells. Repeat the exercise for 20 to 25 minutes by alternating both hands. Push as much blood as possible but remember to apply pressure based on your tolerance level.

The exercise has to be done with a flaccid penis. It helps in stretching the penis and only flaccid penis can be stretched.

Method: Applying little pressure hold head of your penis followed by stretching it as much as you can. If it pains stop there and then and continue after some time. Now, hold on to the stretched position for 15 seconds and repeat for at least 5 times.

Once you are done, massage the penis for restoring blood circulation. The stretching can be done by holding penis upwards, downwards or even in left or right direction.

4 thoughts on “Are You Dissatisfied With Your Penile Length? These Exercises will Help In Penis Enlargement.”